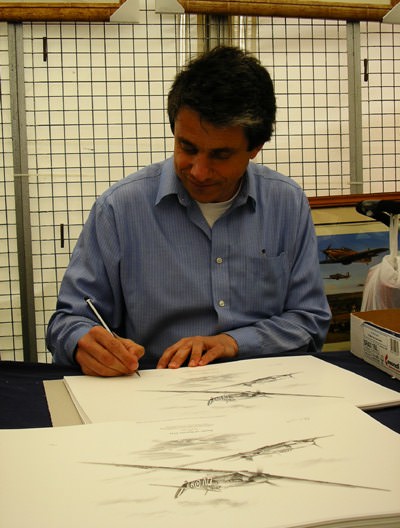 Nicolas Trudgian is one of the most respected and collected Aviation Artists currently working in the field. His paintings contain so much more than just the main subject of the piece - his wonderful and detailed backdrops and panorama's elevate his Art out of the ordinary. Collectors admire his landscapes with just as much enthusiasm as the detail on the Aircraft in question.

Nick was born in March 1959 in the famous Naval port of Plymouth. His Father, who had served in the Royal Air Force during World War Two, was also a talented artist who worked in the Devonport shipyard. The young Nick grew up with the sights and sounds of Steamtrains, Aircraft and large Naval vessels as part of daily life and, as his artistic talents started to manifest themselves, it was only natural that Nick's initial fascination was with 'machinery'. It was also at this early stage that he developed his passion for the railways, and Steam Locomotives in particular, something that he has never lost. In 1975 Nick attended a lecture of the well known wildlife artist David Shepherd and, after meeting him, he decided to pursue a Career in Art. Throughout the 70's Nick was heavily involved in a Railway Preservation Society not far from his home town and it was for the aid of the Society that Nick sold Prints of his work for the first time.

After leaving school, Nick did five years of formal art training, firstly in Plymouth and then in Cornwall at what is now the Falmouth College of Art. He specialised in technical illustration producing highly detailed illustrations showing how machines and vehicles worked. Coupled with more traditional lessons in painting and drawing (and a great deal of extra painting done in his spare time) these years gave Nick the perfect combination of skills necessary to follow his dream.

In his final year he was invited to represent his College at a large London Exhibition, where he again met David Shepherd, who immediately identified himself as another train enthusiast. There was one area David believed Nick was lacking. Pointing at one of Nick's pictures of a South African steam loco he told Nick that, wherever possible, you should experience your subject matter at first hand - as he had done withelephants, tigers and Rhinos. It might be impossible to revisit D-Day or the Battle of Britain but there were still a few steam locos to experience in far off places. Nick needed no further prompting and blew every last penny he had on what was to be the first of many adventures. David's suggestion that an artist needs to get as close to his subject as possible Nick took to the extreme and he became an unofficial engine driver! He set out on a quest to drive 100 different engines - something he has recently achieved !!He has spent many hours at the controls of steam trains as far removed as Argentina and China, savouring what was very often the very last opportunity to see these wonderful locos, let alone drive them.

But that first trip left Nick with nothing in the bank and having now left College, it came as a shock to find how difficult it was to break into the world of art publishing. Even selling originals was a problem if you hadn't yet made a name for yourself. He accepted a very generous invitation to return to his College as a lecturer, which provided welcome income, but after two years the realisation that it would take many more years in order to make a name as an artist forced him instead to become a Commercial Illustrator, as most of his friends had sucessfully done. One person who moved with Nick 'up country' to take up his new job was Ruth. She had been one of Nick's students but, no doubt against college rules, had become something more than that and now they would be setting out in this new venture. They are still together today with Ruth providing invaluable assistance to Nick as a second, and very talented artist, looking over his shoulder.

That Nick is no longer an illustrator and hasn't been for many years, was simply down to chance! Long after he had given up hope of making it in art publishing the Military Gallery actually came looking for him! They were looking for an artist to have in their Aviation Art folio alongside the World number one in the field, Robert Taylor. This great opportunity came 18 years ago and, to date, Nick's dedication to this dream-come-true is clearly spelled out in well over 100 Limited Editions celebrating some of the greatest moments in Aviation History. He has gathered a large, and loyal, following around the World for his unmistakeable style of art. His work has already filled Two Volumes under the title of 'Air Combat Legends' and a third Volume will soon be in preparation.

Nick and Ruth live in the beautiful and peaceful Cotswold Hills far from anywhere but he sometimes leaves this quiet idyll to visit Air Shows and Museums or make appearances at art shows. Still following that advice of getting close to your subject he has, on occasion, flown in old aeroplanes, one even catching fire and requiring an emergency landing [!] Mostly though, he is at his easel immersed in his latest work.

A typical aviation painting demands an unusually wide appreciation of subject matter and artistic disciplines. The marriage of landscape and engineering in one painting is not an easy one but it is a challenge Nick relishes. The beauty he sees in the shape of a Spitfire's wing is equal to that of a sunset over an estuary or mists hanging on forested slopes. He tells me that beyond any subject matter in a painting, the ultimate joy is to paint light and mood. "This is the hardest challenge of all and one you never quite achieve which is why you carry on and why it always remains a pleasure"

Cookies help us deliver our services. By using our services, you agree to our use of cookies.
Learn more